In its early days, the oil industry did not have the same economic and political significance as today. In other words, crude oil prices were far less important to the economy. Nevertheless, one of the best ways to trace the history of the oil industry is by monitoring price dynamics and associated events. In its latest Statistical Review of World Energy, BP, the oil major, published an important dataset with annual average oil prices dating back to 1861. The inclusion of different grades of crude reflects the challenges of data collection and comparability across such a long time span.

To show the oil price history in its entirety, three time series were merged together. For the 1861-1944 period BP used average prices in the United States. Next, prices between 1945 and 1983 are those of Arabian Light oil at Ras Tanura, a major Saudi port and refinery in the Persian Gulf. Back then, the market was driven by sellers and buyers were mostly price-takers. Finally, BP used prices of Brent, today’s global benchmark, for the period from 1984 to 2014.

All of the prices (shown in the chart below) are annual average values and have been converted to real 2014 US dollars, i.e. they are adjusted for inflation. 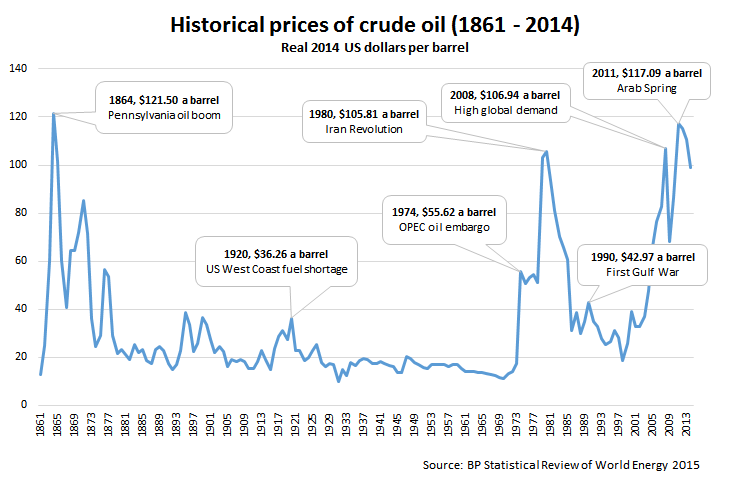 Below we list some of the major events associated with oil price spikes:

1864: The very first oil shock
In 1859, in the run up to the American Civil War, the first commercially viable oil well was drilled in Pennsylvania. After an initial enthusiasm and a price hike, oil become cheaper as drilling activities spread throughout the state. Extraction pioneers, however, were not able to keep constantly high output and could not stop the wells from being flooded. This led to a drop in production rates. Coupled with the growing demand for crude, prices sky-rocketed in 1863-1864. New oil deposits were gradually discovered and extraction picked up again. The peak in production in Pennsylvania in the early 1890s corresponds with the lowest oil prices in the 19th century.

1973-1974: OPEC oil embargo
As oil production in the United States peaked in the early 1970s, the role of the Organization of Petroleum Exporting Countries (OPEC) grew increasingly important. In October 1973, the Arab members of the cartel declared an embargo on oil exports to a number of countries (mostly Western) that supported Israel which, at that moment, was in conflict with Syria and Egypt. By November, the crisis caused a decline of 7.5% of global oil production. In January 1974, crude oil from the Persian Gulf was double in price.

1979-1990: More turmoil in the Middle East
The Iranian Islamic Revolution of 1979 and the subsequent Iran-Iraq war marked another steep price hike on the oil market. The revolution and the events in its aftermath reduced global oil supply by 9%, according to IEA estimates. After supply surplus and price stabilization in the 1980s, there was another price increase. In August and September 1990, President Saddam Hussein, the leader of Iraq, set on fire petroleum fields in neighboring Kuwait, also major oil producer. As part of Iraq’s geopolitical aspirations, Hussein’s army invaded Kuwait which marked the beginning of the first Persian Gulf War.

2007-2008: Boom before the bust
In the years ahead of the Great Recession, the global GDP growth (at 4.7% in 2004 and 2005 and 5% in 2006 and 2007) fostered greater demand for petroleum. Producers could not catch up with it and after 2005 oil output did not grow. Some major oil fields in Saudi Arabia and the Gulf of Mexico reached a mature phase and their output began to decline. Gradually, demand pressures pushed the oil price higher and higher. At its peak in July 2008, the Brent benchmark crossed the 145 US dollars per barrel mark. In contrast to other recent price hikes, this one was not the result of a specific geopolitical standoff. Rather than the main reason, confrontation in the Middle East and Africa was a contributing factor to the complex supply and demand interplay.

Take part in our forecast survey on future oil prices.