Governments impose taxes on fuels for various reasons: to raise budget revenue, to discourage excessive use, to combat environmental degradation, etc. Taxation is particularly strong in Europe where passenger vehicle ownership is also very high. With the Energy Taxation Directive of 2003 (later amended), the European Union established minimum levels of excise duties every Member State must comply with. These duties apply to fuels for transport and heating as well as for electricity.

The chart below shows excise duties on unleaded gasoline Euro-Super 95 in all 28 EU Member States (in absolute terms). Where the national currency is not Euro, the respective currency unit was converted to Euro using the exchange rates provided by OANDA Corporation. The graph clearly demonstrates that in the UK and the Netherlands taxation is highest. In contrast, Hungary and Bulgaria apply twice as little duty pressure on end consumers of gasoline, with the latter being close to the minimum EU excise rate for gasoline of 359 Euro per 1000 liters. 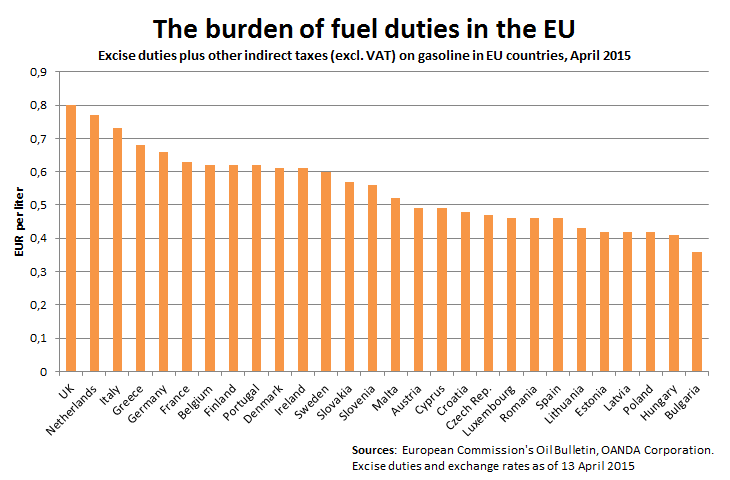 Excise rates are now calculated on a per 1000 liters or kilograms base. For reasons related to environmental protection and fixing market distortions, the European Commission wanted to revise the directive stressing on the content of energy and carbon dioxide as a main reference for tax levels. However, the Commission’s efforts have so far been fruitless. In many EU countries the public perceives these Brussels proposals as an unwarranted tax burden that could potentially hurt end consumers as well as the competitiveness of European industries.

To see current gasoline prices in EU and the rest of Europe, please refer to this page.