As crude oil prices fell nearly 50% from their June 2014 highs, retail prices of gasoline in India and Pakistan, two former British colonies known for their long-time rivalry, followed suit. Drivers in Pakistan enjoy rates at the pump which are on average 22% lower compared to those in India, analysis of our data shows. While Indians paid 1,18 US dollars per liter throughout the year between March 2014 and March 2015, in Pakistan petrol stations charged only 0,97 US dollars per liter.

In June 2011 the Pakistani government deregulated pricing of petroleum products. Nevertheless, suppliers now use government-approved formula to determine rates at the pump. Unfortunately, lower prices can't make you better-off if you don't have the fuel in the first place. For several days in January 2015 major cities in Pakistan suffered from fuel shortages. The leading retailer, Pakistan State Oil, was heavily indebted and could not afford paying to its suppliers. Another factor was the higher than usual demand fostered by falling gasoline prices.

In India fuel prices are deregulated (gasoline since June 2010 and diesel since November 2014). In the past few months, however, excise duties were increased in order for the government to make use of the cheaper crude oil. Although the Indian retail market is liberalized, the state has control over three fuel distributors, which often alter prices in line with one another.

In the graph below, we compare average retail gasoline prices in India and Pakistan converted in US Dollars for the respective week. We use historic exchange rates for the Indian Rupee (INR) and the Pakistani Rupee (PKR) against the US dollar derived from OANDA Corporation. Our observations show that prices in Pakistan change less frequently compared to India. 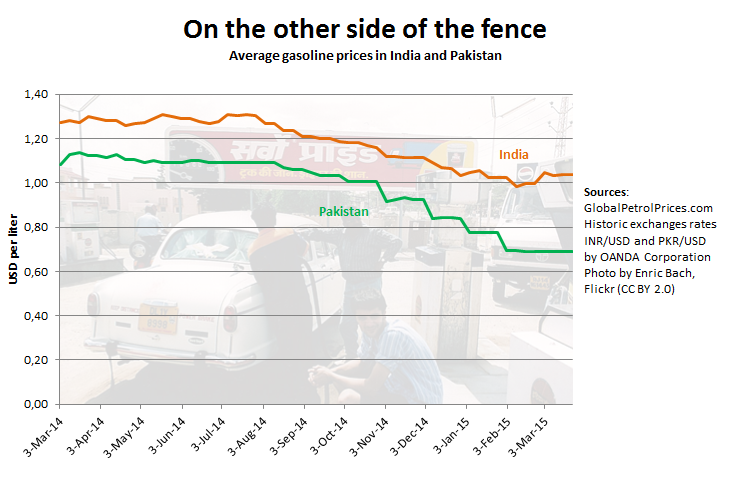 For gasoline prices in India, please consult this page and for prices in Pakistan this page.